The ENTRANCE project is partly going to build on the findings and achievements of the C-BORD project. This H2020 project terminated in November 2018 and was concerned with developing and testing a comprehensive cost-effective TRL-7 solution for the generalised inspection of container and largC-BORD Passive Detection Features includede-volume freight in order to protect EU borders, coping with a large range of container non-intrusive inspection (NII) targets, including explosives, chemical warfare agents, illicit drugs, tobacco, stowaways and Special Nuclear Material (SNM).

As a reminder, the objectives pursued by C-BORD and the Toolbox which was designed and developed under the project are detailed below.

In the C-BORD project, a new generation of Container Inspection Systems was developed which combined five technologies to provide advance inspection capabilities. Part of the project was dedicated to developing passive neutron and gamma detection sub-systems to be evaluated in use cases whose aims were to:

In the C-BORD project, a new generation Container Inspection System was foreseen and resulted in an advanced system, combining X-ray techniques capable of localizing objects inside a large volume (cargo container) at a high rate, and additional techniques more sensitive to specific substances, such as the Passive Technologies, the Tagged Neutron Inspection Systems, the Photo-fission technologies, and sniffers.

The C-BORD project was also an opportunity to improve X-ray techniques, particularly with regard to the accuracy of the material discrimination and also to help the image interpretation (Assisted / Automatic Target Recognition)

The issue at stake: the X-ray techniques have developed significantly over the past 20 years for cargo screening. They include an ability to classify materials and objects according to the atomic number Z. Like any radiographic technique used in medical diagnosis, industrial control or luggage screening, they allow visualizing the inside of a truck or container.

The strength of the X-ray techniques lies in their ability to provide and localize shapes and chemical information of objects in a cargo container at a rather high speed. However, it consists in the projection of a 3D volume (cargo container) on a 2D plane overlaying all the plans and all thicknesses. This results in a mixing of shapes and materials inevitably bringing, in some locations, a bit of confusion and ambiguities. Moreover these methods are thus poorly sensitive to specific substances.

In the C-BORD project, focus was put on a new generation of Tagged Neutron Inspection System (TNIS) for cargo containers: the first Rapidly Relocatable Tagged Neutron Inspection System (RRTNIS). The RRTNIS was meant to be a second-line system to be used on sealed containers, enabling the detection of explosives, illicit drugs and chemical agents in a suspect voxel (elementary volume unit).

The early system named Tagged Neutron Inspection System (TNIS) [1] uses an associated-particle sealed neutron generator to detect explosives or other threat materials concealed in cargo containers. The neutron generator, with a built-in segmented alpha particle detector, is used to produce a 14 MeV neutron and an alpha particle through the D+T fusion reaction. The position of the alpha particle defines the direction and time of the neutron emission, since the two particles are emitted simultaneously and almost back-to-back. Gamma rays induced by neutron inelastic scattering on the elements of the cargo material are detected in coincidence with the alpha particle. The time delay between alpha and gamma detection determines the depth in the container where the neutron interaction took place.

The experience gained in past EU projects such as EURITRACK [2], ERITR@CK [3] and national projects such as SLIMPORT [4] and UNCOSS [5] had shown the capability to determine the type of material present in a given point inside the cargo by remotely measuring the elemental ratios in that point (i.e. gamma rays emitted in fast neutron reactions characterize carbon, oxygen and nitrogen, which are the major components of explosives or narcotics). Second generation TNIS advanced to the point where a rapidly relocatable system could be designed, taking advantage of recent electronics and neutron generator developments, especially in terms of compactness. Using the expertise gained with the previous projects, a high performance RRTNIS was designed with a high-level user-friendly interface.

Context: the detection of SNM (Special Nuclear Material – mainly uranium and plutonium isotopes) is a crucial issue for homeland security applications in order to prevent illicit trafficking. Non-destructive techniques are well-suited to cargo container inspection particularly because they are non-intrusive and do not require opening the container, which is a time consuming and potentially dangerous process.

Non-destructive passive methods are based on the detection of particles spontaneously emitted by radionuclides of interest, mainly gamma and neutron emissions. However, these passive emissions can easily be impacted by the presence of shielding around nuclear material and by the poor passive emission of actinides (especially for uranium isotopes).

These active techniques are two-step processes based on the fission reaction:

Fission reactions are induced by high-energy photons (exceeding 6 MeV energy) delivered by a linear electron accelerator (LINAC) and identified under the technical term “photofission”. This highly penetrating incident photon beam is well adapted to the analysis of cargo containers. Several previous developments showed the potential of using photofission techniques for cargo container scanning in the context of homeland security applications. For example, the DEMIP project led by CEA LIST was a proof-of-concept step in order to demonstrate the experimental feasibility of this approach on mock-up containers.

Based on this background know-how, a main technical issue of the C-BORD project was related to the development of the first European photofission prototype able to be deployed in a harbor environment. The objectives of this development were the following:

Deployment of the Prototype

Within the C-BORD project the final purpose of these developments consisted in the deployment of this non-destructive active system in the Rotterdam harbor. A crucial step of this final demonstration was the integration of the photofission detection module in the current dual view X-ray imaging system set up in the Rotterdam harbor (two 9 MeV LINACs used for high-energy imaging purposes).

The C-BORD Technology Sub-System evaporation-based detector aimed to develop detection technologies for volatile chemicals that may be present in a container, giving warning of hazard or contraband. These were expected to complement X-ray imaging by enabling molecular specific detection (chemical information instead of physical properties), improving the discrimination power of the scanning system.

Previous sniffing approaches failed because of the complexity of the problem at hand: 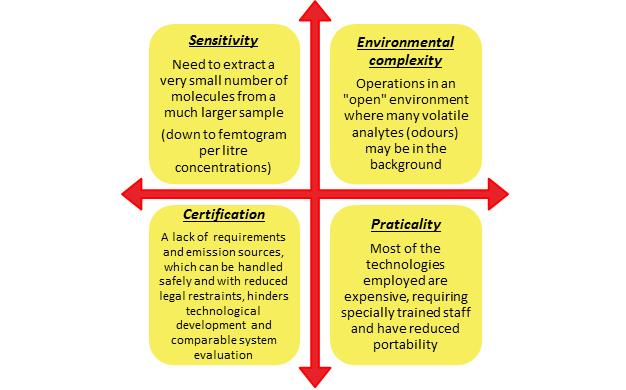 A new biomimetic approach to detection and identification of volatile chemicals was employed, coupling selective binding elements from biological systems – such as OBP (Odorant Binding Proteins) – with highly sensitive diamond microcantilever and machine learning. It also increased the selectivity of the detector by arranging the biosensors in an array.

Each individual sensor in the array was containing a specific OBP featuring a fairly broad selectivity to some chemicals or families of chemicals. The combination of the response of the sensors to a particular odour was translated into a pattern which is a fingerprint of the specific odour. A multiparametric software used a database built during an initial calibration phase of the system to recognise and classify the volatile chemicals.

Most of the organisations and individuals in ENTRANCE have already collaborated through previous successful EU funded projects such as C-BORD, CORE, EUROSKY and are re-uniting their capabilities to build the value chain of NII for effective border controls.

Read more about the ENTRANCE partners